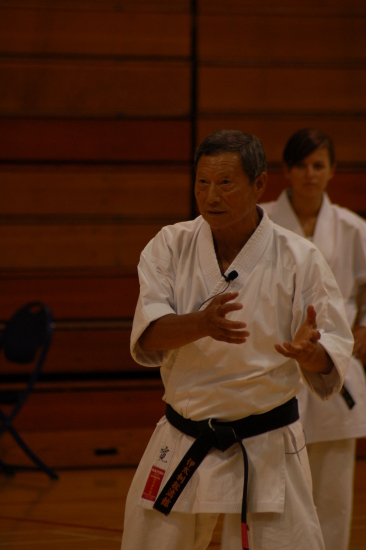 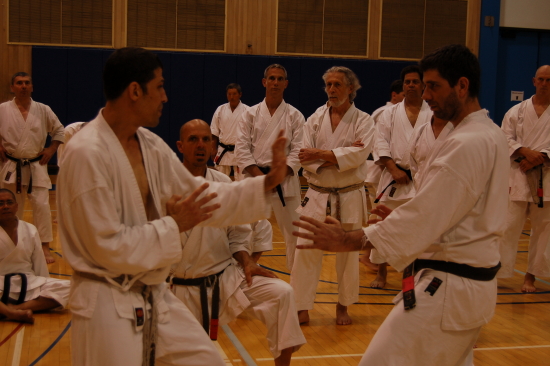 We never heard Nishiyama Sensei let himself be introduced as "Master Nishiyama". He was actally past that. He was a "Past Master", above and beyond a "Master".

The best Kata I have ever seen.

Many, many years ago sensei was trying to encourage a more well rounded Karateka. In competition students had gravitated to either Kata or Kumite. This was one of the reasons for adding more competition events. He was also covering Kata in greater detail. So one year at Regionals I had decided to enter Kata (see it worked), I had gravitated only to Kumite. During the Kata competition Avi sensei was up. I had never seen him do Kata in competition. Of coarse I had seen him thousands of times on the floor at Central. So as you can imagine I was watching him very close. He did Go jyu shi ho sho. That Kata was the best I have ever seen.

All the points that sensei had been going into detail were present. The system that sensei had refined was all in that kata. Please forgive me, but the only flaw was that he lifted his heal stepping back into kibadachi with horizontal hammer fist, you know the move. His kata was not fancy nor flashy as is typical of this kata. But if you run down the list of all the principles of Traditional Karate, they were all present.

I was shocked to see that not only did he receive a low score by all the judges but the lowest score period!

The judges had no idea of what they were looking at. Their technical level was not up to speed. I also feel some may have been bias. These judges had not keep up with the level that sensei was once again teaching.

Avi sensei should have received 1st place and based on lacking so many principles there should have been no second or third. Sensei next mission was to bring up the technical level of judging.

(Students and instructors that have drifted away the past 8 years, lack the technical level that is present today. Now is the time to get up to speed!)

I have seen soooooo many Katas that were flashy, very fast bla, bla, bla, to the uninformed look fantastic, but based on the principles, and because they neglect the principles should receive a ZERO score. Just as in Kumite when someone comes swinging wildly with no control and the match is ended due to lack of technique or understanding.

So as was always the case I would make it a point to show up at Central the following Monday after any shihai to hear the critic by sensei of the day week or weekend.

Now we began the next step.

The best kata I have ever seen was performed by Avi Rokah at our Western Regionals.

PS - If these other athletes would become familiar, learn, practice, appply these principles my comment will have to be ammended. Judges who lack this information must also come up to speed.

PSS - I wittnessed how sensei used Go gyu shi ho sho to develop a student to a much higher level (not Avi but someone else), it was incredible to see the transformation over time!